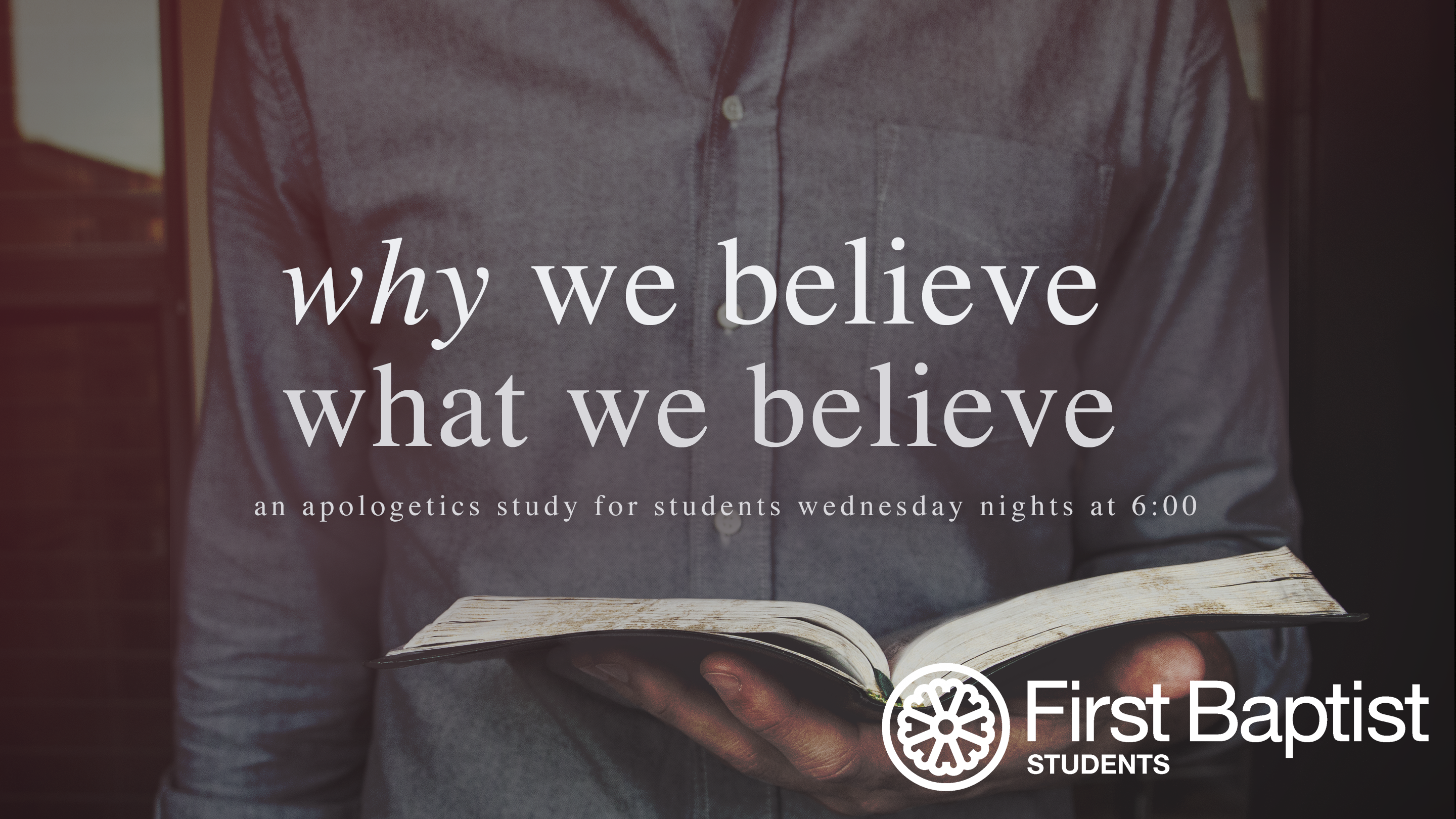 Why We Believe Introduction

Why we believe what we believe. It is easy to hold to a belief, even under intense pressure, when you know why you have that belief. I have the belief that when I sit on this stage, it will hold me. Not because someone told me it would, but because I can look at it and tell that it has all of the necessary requirements for me to sit on it.

There is a surface that I can sit on. There are legs that are under it that are sufficient to hold my weight, there are brackets that are holding those elements together. Not only that, but I have sat on this stage over and over again with the same result. It has never fallen over.

I certainly would not be able to counter that argument as well as someone who is an engineer could, but I would be able to hold my own in a discussion about the validity of the fact of whether or not the stage could hold me because of my knowledge and experience with things that hold people when they sit down on them.

The bottom of our graphic for this study says, “an apologetics study for students”. Apologetics is a word that isn’t in our daily vocabulary, but all of you use apologetics every day. It doesn’t mean to apologize or say you are sorry, but to give a defense of what you believe to be true.

We are not sorry for what we believe, but we should be able to give a defense for what it is that we believe. If you are not right now, at some point in the future, your belief in Christianity will be challenged.

It might be a friend, it might be a roommate, it might be a college professor, it might even be a family member, but at some point, you are going to have to give a defense of why you believe in this crazy religion that we call Christianity.

I don’t call Christianity crazy to be disrespectful, but some of our beliefs are a little out there, so I want you to be able to defend why you believe them rather than just blindly following what I or your parents, or your grandparents tell you to.

The kind of defense that we should be able to give is kind of like a legal defense. Turn in your Bible to 1 Peter 3:15. We should always be ready to answer anyone who would ask a question like, “Why are you a Christian? How do you know that you can trust the Bible? Did Jesus even really live? How do you know that those are not just myths written down hundreds of years after Jesus died?”

All of those, and more, are real questions that I have gotten in my life so we need to be able to give an adequate answer to those who might question our beliefs. One writer said, “Christianity is either EVERYTHING for mankind, or NOTHING. It is the highest certainty or the greatest delusion. But if Christianity is everything for mankind, it is important for everyone to be able to give good reason for the hope that is in him in regard to the Christian faith.

The Bible appeals to facts of history that are clearly recognizable and accessible by everyone. Christianity is based on indisputable facts. The facts backing up the Christian claims are not a special kind of religious fact. They are the normal, informational facts that every historical, legal, and ordinary decisions are based on.

Luke, who wrote both the gospel of Luke and the book of Acts, said that he tried his hardest to provide an orderly and accurate historical account. Turn over to Luke 1:1-4.

Some of those historical and knowable events were the resurrection of Jesus Christ, an event Luke says, that was validated by Jesus himself through, in his words, “infallible proofs” over a 40-day period.

One of the reasons that we are going to go through these 8 weeks is to present to you some of these indisputable facts, and to determine whether the Christian interpretation of these facts is not by far the most logical.

The objective of apologetics is not to convince someone to become a Christian through arguments. The objective is to lay out the evidence for the Christian faith in an intelligent way, so that they can make a meaningful commitment under the convicting power of the Holy Spirit.

I don’t want yall to take what we are going to talk about here and go start an argument with that classmate that you know is an atheist. Apologetics do not save, God does. God often uses apologetics to help clear the way of obstacles to faith and help show that faith in Christ is reasonable.

When I lived in Boone the fog would get so thick that sometimes you couldn’t see the car in front of you. Everyone would put on their hazard lights to keep from getting hit. It was dangerous to drive in those conditions.

The point is, if you want to see what’s really there, you’ve got to get rid of what is obscuring your view. In the case of Christianity, many people approach it with such foggy thinking that they can’t see what it really is. Before they, or we, can look at the evidences for Christianity, there are some misconceptions that need to be cleared up.

Maybe you have some of these misconceptions yourself.

One of the main misconceptions of Christianity is that we have a “blind faith”. It goes something like this, “you Christians are so pitiful! All you have is blind faith”. This is meant to say that in order to trust in God and become a Christian, you have to close off your mind.

When Jesus and the apostle called people to faith, it was based on an intelligent faith. In 2 Timothy 1:12, Paul said, “I know whom I have believed”. Jesus said, “You shall know the truth and the truth will set you free”.

Faith in Christianity is based on evidence. It is a reasonable faith. Faith is the assurance of the heart in the adequacy of the evidence.

One of the greatest apologists of our time, Josh McDowell started following Jesus out of an attempt to prove Christianity false. When he finally surrendered his life to Jesus he said, “I took the evidence that I could gather and placed it on scales. The scales tipped in favor of Christ as the Son of God, resurrected from the dead. The evidence was so overwhelming that when I became a Christian I was stepping into the light, not leaping into the darkness”.

The Christian faith is an objective faith; therefore it must have an object. Jesus Christ is the object of that faith and is completely opposed to today’s idea of “it doesn’t matter what you believe, as long as you believe it hard enough.

I hear a lot that as long as you are sincere in your love for the god that you worship, you will ultimately be saved. I’ve heard people say that they know people from other religions who have more faith in their god than some Christians have in Christ.

That might be true, but the Christian is saved and the other is not. The reason? Christianity is a faith with an object. Paul argued, “I know whom I have believed”.

We have to avoid the attitude that it doesn’t matter what someone believes as long as they are sincere. If the object of the belief is anyone or anything other than the God of the Bible and his Son Jesus Christ, the belief is worthless.

Misconception 3. The Bible is full of Myths.

Some critics say that the events in the Bible, the virgin birth, the resurrection, Jesus turning water into wine and walking on water didn’t really happen. They were just added later to elevate Jesus to the status of a divine figure, though, if he lived at all, he was no more than a normal man.

We are going to talk about the reliability of the Bible in a couple of weeks, but the biblical writers took great care in order to make sure that what they wrote down was fact. Everyone who wrote the NT was either an eyewitness of the events they described or they recorded the eyewitness firsthand accounts of the events.

If they are making up stories or adding in things that were not true, why would they appeal to fact and appeal to the memories and testimony of those who were opposed to their message? If you are not absolutely sure about what you are saying, you would never do something like that.

Sometimes we are able to convince Pastor Dan that he said something that he didn’t, but it doesn’t happen much…

This one is something that we are hearing a lot today. “You Christians think that your way is the only way and that all other views are wrong. How intolerant can you be? Why can’t you accept other people and what they believe to be true also”?

That word tolerance gets thrown around a lot and somehow the definition has changed in our culture without changing in the dictionary. Tolerant means, “showing willingness to allow the existence of opinions or behavior that one does not necessarily agree with”.

Today’s a new definition of tolerance is being forced on us that says anyone who doesn’t agree with me is wrong and should be shut down. Christians understand what is at stake when we back down from our beliefs.

Today, people believe that all truth is inclusive, that it gathers under its wings claims that oppose each other. The fact, though, is that all truth is actually exclusive because it has to exclude as false anything that isn’t true.

The same is true about Christianity. If the claims of Christianity are true—and many, many people accept them as true—these people are no more intolerant for their belief than those people who accept Washington DC is the capital of the USA.

What we are going to see through this study is that Christianity is true and has strong evidence supporting it. It is the one who disbelieves in the face of such evidence that is really intolerant and close-minded.